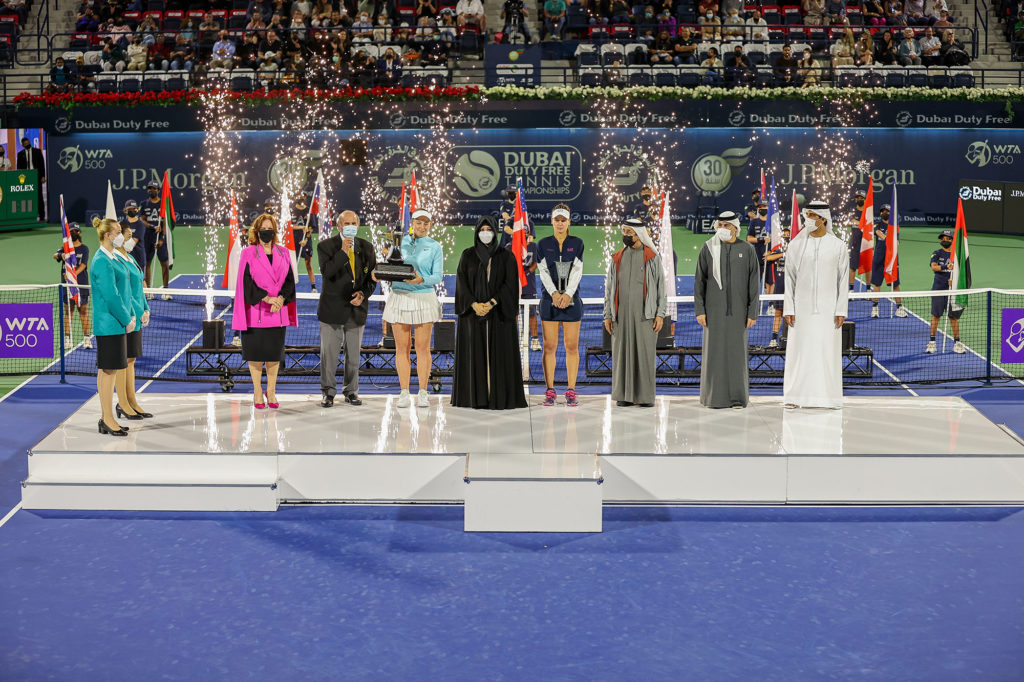 What made her victory all the more remarkable is that she had to overcome no less than four former Grand Slam champions during the week, fight back from losing the first set on three occasions and to fend off a match point before overcoming Petra Kvitova in the quarter-finals.

“We congratulate not only our new champion Jelena Ostapenko, but her opponent Veronika Kudermetova on her impressive week,” said Colm McLoughlin, Executive Vice Chairman and CEO of Dubai Duty Free. “Both have performed with distinction in overcoming elite opponents, and fully deserved to be in the final. We wish them well during the rest of the season and look forward to welcoming then back to Dubai.”

Ostapenko totally dominated the opening set, dropping just eight points as Kudermetova struggled to deal with her opponent’s aggressive play. And although Kudermetova briefly showed signs of being able to turn the match around by leading 2-0 in the second set her advantage was short-lived.

Ostapenko levelled at 2-2 and broke again to lead 5-3, and although Kudermetova offered some late resistance by preventing her opponent from serving out the match, Ostapenko responded by breaking serve again and ended the contest on her second match point. “I’m really happy with the title,” said Ostapenko after winning her fifth career title and first since Eastbourne in June 2021. “I think in general the whole week I was playing really well, had some great wins. I really was focusing, really ready for a battle today. Very focused the whole match I think, especially in the beginning. I mean, I played really well.

“It’s really great to win the singles title, of course, being in finals of doubles. I was not expecting because I had tough matches in singles. I was playing doubles for fun, but making finals was great.”

Kudermetova, who overcame former world number one Victoria Azarenka and defending champion Garbine Muguruza on her way to the final, was seeking her second career title after winning in Charleston last year, and she was playing in her second final this year after finishing as runner-up in a pre-Australian Open event in Melbourne.

“I think Jelena, she play very well today,” said Kudermetova. “She play very aggressive from the beginning of the match. She don’t give me, like, easy mistakes. She play only winners. I didn’t find my game.

More: Photos: Ostapenko vs. Kudermetova in the 2022 Dubai women’s final

“From the beginning of the second set I tried to play more balls inside of the court. I tried to, like, fight. I tried to show my emotion. I mean, I tried to do everything. Also I beat a lot of good players (this week). It was very emotional for me. Maybe I was not ready, like, mentally for that final today. But I hope I can take a lesson from that final and next time I will do better.”

The pair then returned to court to face each other again in the doubles final, with Ostapenko partnering Lyudmyla Kichenok and second seeded Veronika Kudermetova teaming with Elise Mertens.

Kudermetova received some consolation for her singles defeat as the Australian Open semi-finalists beat Kichenok and Ostapenko 6-1 6-3.

Sandrine Testud in 2002 and Svetlana Kuznetsova in 2004 were the only other players to contest both the singles and doubles finals in the same year, finishing as runner-up in both events. 2022 is the first year that both singles finalists also took part in the doubles final.

“We said at the beginning of the week that, despite so many top 10 players competing, there was no certainty that one of them would win the tournament, and so it proved to be,” said Tournament Director Salah Tahlak. “Only one seed managed to reach the quarter-finals, which underlines the fantastic depth in the women’s game. There were so many thrilling matches throughout the week as upsets came thick and fast, and now we eagerly look forward to what is certain to be an equally exciting ATP week.”

The tournament continues between 21st and 26th February with the 30th anniversary celebration of the ATP 500 event, featuring world number one Novak Djokovic who will be bidding for his sixth Dubai title. Muguruza To Play Krejcikova In Final Of Dubai Duty Free Tennis Championships
March 12, 2021 – DUBAI, UAE:  Garbine Muguruza battled for over two hours to overcome a defiant Elise Mertens 6-4 7-6(5) on Friday to reach the final of the...
Read more